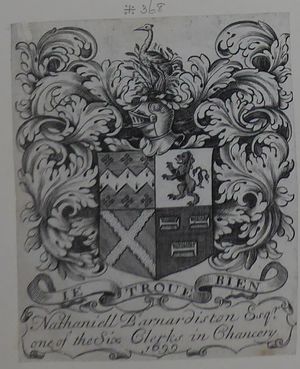 Of Brightwell. Member of a prominent Suffolk family including Sir Thomas Barnardiston, 3rd bart, (1674-1700), Ann Barnardiston (d.1701]]), and Sir Samuel Barnardiston, 1st bart, (1620-1707) who were variously merchants and MPs. Nathaniel, the fourth baronet, succeeded his brother Sir Peletiah in 1712, but died the same year, when the baronetcy became extinct; he was one of the Six Clerks in Chancery.

Like other members of the family, Nathaniel used a dated engraved armorial bookplate (Franks *368). The extent and disposition of his library is not known.

Retrieved from ‘https://bookowners.online/index.php?title=Nathaniel_Barnardiston_1672-1712&oldid=22612’
Categories:
This page was last modified on 23 June 2022.
Content is available under CC BY-NC 4.0 unless otherwise noted.