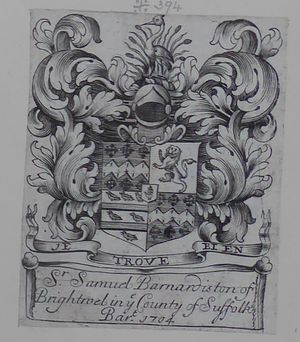 Third son of Sir Nathaniel Barnardiston, of Kedington, Suffolk, a leading puritan MP and landowner, and member of a prominent Suffolk family whose members included Sir Thomas Barnardiston, 3rd baronet, (1674-1700) and Ann Barnardiston (d.1701). He went into mercantile trade in London, acting during the 1640s as an agent for the Levant Company, through which he became wealthy, purchasing his own estate at Brightwell near Ipswich, where he erected a large house. He was in Smyrna in the late 1640s. He was knighted in 1660 and made a baronet in 1663. He was deputy governor of the East India Company 1668-70, and involved in a major dispute between the Lords and the Commons concerning the Company's affairs. He became MP for Suffolk in 1673, though the election was contested, leading to lengthy legal proceedings. His strong puritan sympathies led him to support the anti-Catholic exclusion cause in the late 1670s and 1680s and he helped (as jury foreman) in the 1681 acquittal of the Earl of Shaftesbury; during the 1680s he was himself imprisoned and fined for libel, though eventually released and vindicated. He continued to serve as an MP throughout the reign of William III.

The extent of his library is not known; there is no mention of books in his will, and his estate passed to a nephew.

Towards the end of his life, Barnardiston began using an engraved armorial bookplate, dated 1704 (Franks *394; the original plate was subsequently re-engraved and redated 1728 for the use of his descendent the 5th baronet).

Retrieved from ‘https://bookowners.online/index.php?title=Samuel_Barnardiston_1620-1707&oldid=22613’
Categories:
This page was last modified on 23 June 2022.
Content is available under CC BY-NC 4.0 unless otherwise noted.