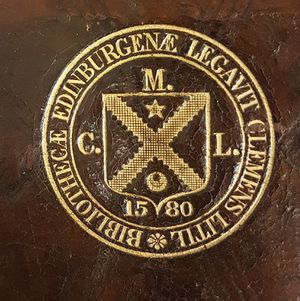 The eldest son of Clement Litill (d.1551), a successful Edinburgh Merchant, and Elizabeth Fisher, who together ran a prosperous shop selling cloth and apparel to Edinburgh’s aristocracy. He attended St Leonard’s College, St Andrews in the early 1540s, then matriculated at Louvain in Flanders in 1546, where he likely studied law. He had returned to Scotland by 1550, and in 1557 was practising as an advocate in Edinburgh, entitled to plead before the Court of Session.

Litill embraced the Scottish reformation. In 1561 he served as an elder on the Edinburgh kirk session; in 1567 he was appointed as one of the kirk’s advocates. In 1564, he was made one of the four members of Edinburgh's commissary court. In 1567, he became an official advocate of the church, acting on its behalf in civil courts. He married Elizabeth Fawside, daughter of John Fawside, a baker, in 1563.

Litill’s library began as a student in St Andrews, with the typical commentaries on the Sentences among works purchased by him. A few of these books bear the provenance of St Andrews faculty, including Jacques Merlin’s General Councils (Paris, 1535) Dd.2.15/2, previously owned by Martin Balfour, Dean of the Faculty at St Andrews; as well as Robert Holcot's In libros Sententiarum (Lyon, 1497), owned by Robert Bannerman It is likely he purchased his 8 volume set of the works of Augustine (Paris, 1531), while studying in Louvain.

Both while abroad and on his return to Scotland, he acquired a variety of Catholic and Patristic works, the majority of which were printed in France, as well as Erasmus’ Paraphrase on the New Testament (Basel, 1522-26). While still a Catholic, he purchased and read works of protestant reformers. He critically annotated many of these, including those by reformer Wolfgang Musculus (1497-1563). He inscribed his copy of Musculus' Psalms (Basel, 1551) Dd.3.10 with the warning “Read with caution because he calls the pope an Antichrist” (Finlayson, p.5).

He continued to purchase books until his death in 1580. These volumes were mostly protestant theological works printed in Switzerland, and included Jean Calvin’s Epistles and Answers (Geneva, 1575). On his death, half of Litill’s law books went to his widow Elizabeth Fawside, who later married the advocate John Preston in 1583.

One of the most notable aspects of Clement’s library is the outstanding provenance of a number of his books. He salvaged the libraries of many of the Edinburgh friaries looted in 1559, including the Dominicans, the Franciscans, acquiring a Sarum breviary printed by Martin Morin at Rouen in 1496, which belonged to the Dominican nuns of Sciennes. He also owned 39 volumes formerly belonging to his friend Bishop Henry Sinclair either given as a gift by Sinclair or his heir Sir William Sinclair of Roslin. These also contain a multitude of fifteenth and sixteenth-century Scottish provenance, such as archbishop William Schevez

The books bequeathed to Edinburgh town council were stamped on the title page with a circular seal bearing Clement's initials and arms, and also with the inscription “I am gevin to Edinburgh & Kirk of God be Maister Clement Litil thair to reman. 1580.” In the nineteenth century, the books were reconstituted as a collection by librarian David Laing, and many were rebound, with an armorial stamp applied to most volumes.

“Clemens parvus” was inscribed on some volumes purchased while he was a student.

Only a few volumes from Litill's dispersed law books have been identified as his. 4 works in 2 volumes survive in Worcester College, Oxford, with the inscription “M. clemens littil” [G.7.7 & G.2.7] 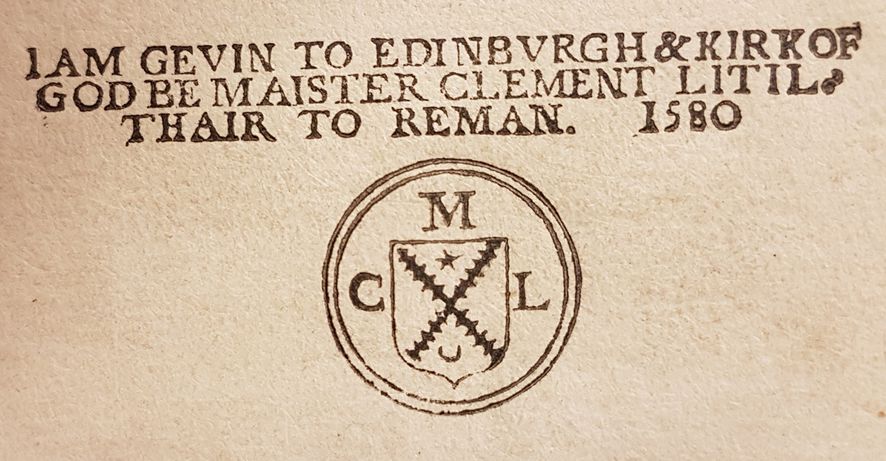 Retrieved from ‘https://bookowners.online/index.php?title=Clement_Litill_1527-1580&oldid=23726’
Categories:
This page was last modified on 7 October 2022.
Content is available under CC BY-NC 4.0 unless otherwise noted.