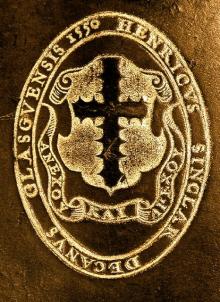 Henry Sinclair, Dean of Glasgow and later Bishop of Ross, was born in 1507/1508 to Sir Oliver Sinclair of Roslin, Edinburghshire (d. 1513), and his second wife, Isabella Livingstone, and was the Grandson of William Sinclair, third Earl of Orkney and first Earl of Caithness (b. after 1407, d. 1480), notable as the founder of Roslin Chapel. In 1524 he matriculated at St Leonard’s College, St Andrews. He held various offices of the Church including rector of Glasgow 1539, Perpetual Commendator of the Abbey of Kilwinning in 1541, and Dean of Glasgow in 1550. In 1558 he was appointed President of the Court of Session. He was employed in embassies in England, Flanders and France throughout the 1550s, and later as Diplomat for Mary Queen of Scots. In 1560 he was appointed Bishop of Ross, and died in France.

Sinclair’s library is one of the largest recorded libraries of a pre-Reformation Scottish book owner. Over 112 volumes have survived, containing close to 135 printed works. Of these, half are folio volumes, and 3 are incunabula. His years in Glasgow are described as “rich in book buying” (Cherry, p.14) and no imprint on a Sinclair book bears a date later than 1556. The analysis of his library by Cherry found that it was dominated by French printers and publishers, which make over half his surviving library, 21 of which were purchased between 1550-1556. Cherry describes a further 10 volumes printed in Germany, 8 in Italy, and 1 Scottish. Notably there is only one English item, Censurae printed by Thomas Berthelet in London in 1530. Unusually for pre-Reformation Scotland, Sinclair owned a significant number of volumes in Greek. His taste tended to be of a contemporary humanist flavour, with 5 different editions of Erasmus, as well as Biblical Commentaries, editions of the classics, and works of astronomy and geometry. Though many of his books remained with his family, later 16th and 17th century inscriptions suggest Sinclair’s library was partially dispersed after his death. 39 volumes were part of the foundation collection of Edinburgh University Library, bequeathed by Clement Litill 1527-1580, who was gifted many of Sinclair's books. Additionally, a number of volumes were subsequently owned by Scot of Scotstarvit, and formed part of his bequest to St Leonard's College in 1620. The Library survives primarily in the University of Edinburgh, with further volumes found in the Universities of St Andrews and Aberdeen. Examples: Aberdeen University Library BCL S147; St Andrews University Library Scot B785.E6B40.

Sinclair usually signed his name on the title page, above the colophon, though sometimes it is found at the beginning of the text. Many of his books also carry one of two armorial bookstamps.

Retrieved from ‘https://bookowners.online/index.php?title=Henry_Sinclair_1507/8-1565&oldid=23727’
Categories:
This page was last modified on 7 October 2022.
Content is available under CC BY-NC 4.0 unless otherwise noted.