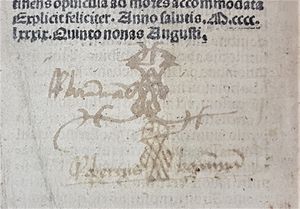 Principal of Pedagogy at the University of St Andrews between 1526 and 1539. In 1538 he was instituted as the first theologian and Provost of St Mary’s College, St Andrews. Spottiswood records him as one of the theologians called upon to judge the beliefs of Patrick Hamilton (1504-1528), who was later burned as a heretic. He resigned his position in old age in 1546.

Very few of Bannerman’s books have been identified and later provenance inscriptions suggest his library was dispersed after his death. The surviving samples of his library are generally written by French Catholic theologians, or theologians with a connection to the University of Paris, and printed in France, including three incunabula. Bannerman owned two commentaries on Peter Lombard’s The Four Books of Sentences. In libros Sententiarum (Lyon, 1497) was authored by the English theologian Robert Holcot c.(1290-1349); while the French astrologer, theologian and Cardinal, Pierre d’Ailly (1351-1420) authored Quaestiones super libros Sententiarum Petri Lombardi (Lyon, 1500). The latter was previously owned by Alexander Colville c.(1513), Rector of Dysart; after Bannerman it was owned by John Duncanson fl.(1556-1566), principal of St Leonard’s College, St Andrews.

He also owned Secunda Pars Operum (Lyon, 1489) by Jean Gerson’s (1363-1429), a leading proponent of Conciliarism. This work is held by Montrose Public Museum, and was later owned by Richard Marshall (fl.1520-1538), an English Dominican who transferred to Scotland in 1538, and settled in St Andrews from approximately 1550.

Identified by the inscription “Robertus banerman” on title page or under colophon, and often a notarial sign.

Retrieved from ‘https://bookowners.online/index.php?title=Robert_Bannerman_fl.1526-1546&oldid=23986’
Categories:
This page was last modified on 6 December 2022.
Content is available under CC BY-NC 4.0 unless otherwise noted.