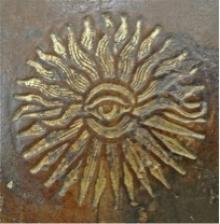 Mountjoy was the eldest of Charles Blount, 1st earl of Devonshire's three sons, all of whom were illegitimate. Through his mother, Penelope Rich, he was the half brother of Robert and Henry Rich.

Two books belonging to Blount have been identified and are listed in the British Armorial Bindings database: both are copies of George Carleton's A thankfull remembrance of Gods mercy (1627). Blount's will makes no mention of his library, but his books may be part of is bequest to his wife of "all the rest and residue of my Personal Estate, Money, Jewells, Plate, Househould Stuffe and furniture".

Blount's identified books (mentioned above) display two armorial binding stamps. One features a pair of yale's horns out of a ducal coronet, and the other is a sun charged with an eye. The latter stamp appears to be almost identical to that used by Mountjoy's father, Charles Blount.

Retrieved from ‘https://bookowners.online/index.php?title=Mountjoy_Blount_1597-1666&oldid=22993’
Categories:
This page was last modified on 14 July 2022.
Content is available under CC BY-NC 4.0 unless otherwise noted.