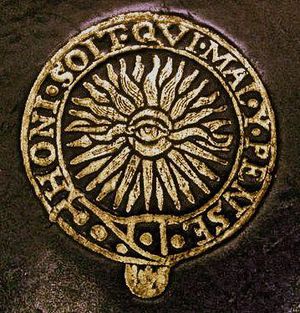 Second son of James Blount, 6th baron Mountjoy (1532/3-1581) and Catherine (d.1576), daughter of Sir Thomas Leigh. It is believed that he studied at Oxford, but didn't attain a degree. Entered Clifford's Inn and transferred to Middle Temple in 1579. In London he was introduced to life at court by his brother William, and soon advanced into the upper echelons of English politics and society, becoming a favourite of Elizabeth I, an MP, and an ambitious soldier. He frequently absented himself from court and parliamentary duties in order to further his military career. Returning to court after one such expedition, the Queen scolded him: "you shall go when I send you; in the mean time, see that you lodge in the court where you may follow your books, read, and discourse of warre".

His will makes no mention of his library, but it may have been included in the bequest of all his moveable goods, which included plate and jewels, for the sole benefit of his wife, Penelope, daughter of Walter Devereux, first earl of Essex. In 1602 gifted money to the Bodleian for the purchase of books, and a specially cut stamp (also featuring a sun charged with an eye) is used on these bindings. Numerous of Blount's books have been identified, and a number are listed in the British Armorial Bindings Database. Examples: found in multiple libraries, among them the Bodleian, University College, Oxford and the Clements Collection National Art Library.

Three armorial binding stamps have been identified as Blount's, all featuring a sun charged with an eye, though the one pictured here appears to be the only stamp used in his personal library. A copy of Vitæ et icones Sultanorum Turcicorum (1596) in the Clements Collection National Art Library has this binding stamp as well as the inscription “CMountioy” on its title page. Charles' son, Mountjoy seems to have used a very similar stamp on his bindings.

Retrieved from ‘https://bookowners.online/index.php?title=Charles_Blount_1563-1606&oldid=23283’
Categories:
This page was last modified on 17 August 2022.
Content is available under CC BY-NC 4.0 unless otherwise noted.