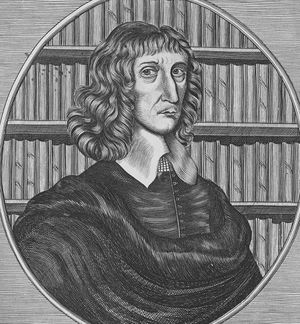 John Selden with his books (frontispiece to his edition of Eutychius, 1658)

Born at Salvington, Sussex, the son of a yeoman. Matriculated at Hart Hall, Oxford 1600, but did not graduate; admitted at the Inner Temple 1604, called to the Bar 1612. Developed a successful legal practice but also pursued an active interest in scholarly research around legal history, leading to the publication of a number of significant works such as Titles of honor (1614), The historie of tithes (1618), Mare clausum (1635) and The privileges of the Baronage of England (1642). He was a friend of Cotton, whose collections he used, and widely acquainted with the contemporary scholarly and antiquarian community. Increasingly involved in political activities from the 1620s onwards, and sometimes controversially; MP in several Parliaments from 1624 onwards. Solicitor and Steward to Henry Grey, Earl of Kent, from 1623.

Selden’s reputation derives partly from his role in establishing the discipline of historical jurisprudence, and partly from the huge library which he assembled and which passed to the Bodleian Library after his death. Ca.8000 vols are now there, although only his oriental and Greek manuscripts were directly bequeathed by Selden; the remainder were assigned to the Bodleian Library by his executors after failing to find another home. Some manuscripts were also given to Cambridge, some went to Lincoln’s Inn, and it is known that a further group of manuscripts was destroyed by fire in 1714. A little over 200 books, duplicates not wanted by the Bodleian, were given to Gloucester Cathedral Library through the influence of Sir Matthew Hale, one of Selden’s executors. The collection was wide-ranging in coverage with noted strengths in oriental and non-western scripts as well as the legal and historical materials that supported Selden’s particular interests. Examples: plentiful in the Bodleian Library.

Retrieved from ‘https://bookowners.online/index.php?title=John_Selden_1584-1654&oldid=22138’
Categories:
This page was last modified on 27 March 2022.
Content is available under CC BY-NC 4.0 unless otherwise noted.