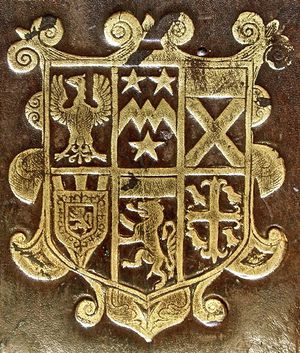 Born at Denton, Huntingdonshire, son of Thomas Cotton, gentleman. BA Jesus College, Cambridge 1566; admitted at the Middle Temple 1588. His teacher at Westminster School, William Camden, had enthused him around the study of antiquities, and in the late 1580s he joined with Camden to help establish the first Society of Antiquaries; in 1599 he travelled with Camden to the north of England to study Roman remains. He was knighted in 1603, and became MP for Huntingdonshire the following year; he was much involved in committee work, and became an agent for the sale of baronetcies in 1611 (having himself proposed the scheme). He was much consulted on historical and antiquarian matters, but fell foul of Charles I and the Duke of Buckingham; he was briefly imprisoned shortly before his death, and banned from accessing his library, as a source of controversial historical evidence that could be used to undermine the royal position.

Cotton developed interests in history and antiquity at an early age, and he had begun to acquire manuscripts by the time he was 20. He went on to become the foremost manuscript collector of his generation, buying and exchanging them wherever opportunity arose, and by the time of his death he had assembled over 1400 manuscripts together with many charters, rolls, seals and other documentary antiquities. They ranged in date from the 4th century to the 17th, and included significant holdings of Anglo-Saxon manuscripts, cartularies, books of medieval monastic provenance, heraldic manuscripts and state papers. His motives have been considered by the various modern scholars who have studied him; although Thomas Nashe, who knew Cotton, mocked antiquarian collections as means whereby wealthy gentlemen could squander their patrimony, his library was seen both by himself and his associates as importantly useful for defining and defending national identity, and for theological debate.

He gave access to his library to a wide range of contemporary scholars, and it continued to be thus quarried after his death. He gave a small group of manuscripts to the Bodleian Library in 1602-03. Its value as a national resource was quickly recognised, and it was maintained and to some extent augmented by his son Sir Thomas Cotton (1594-1662) and grandson Sir John Cotton (1621-1702). It was formally sold to the nation via an Act of Parliament in 1701, with arrangements completed shortly after the latter's death. In 1731, when the library was stored at Ashburnham House, a fire destroyed a number of manuscripts, and damaged others; the manuscript of Beowulf survived, singed, while a unique Anglo-Saxon manuscript Life of King Alfred the Great was lost. In 1753 the manuscripts became one of the foundation collections of the British Museum, and are hence now in the British Library.

Cotton also had significant holdings of printed books, although the size, contents and dispersal of this part of the library is less well known. Several lists of books, or of books loaned, dating from Cotton's time, survive in the British Library, though some are fragmentary. Colin Tite (see below) has documented what can be reconstructed, with a list of ca.100 surviving books (now in libraries around the world), and a further 100 titles which must have belonged to Cotton, but are now lost; there are bound to have been more.

Cotton's papers also include numerous references to the repair or rebinding of his books, with detailed instructions to his binders. His manuscripts were originally housed in a series of bookcases which were referenced by the names of Roman emperors, whose busts stood on top - their British Library shelfmarks still retain this system - and Tite's book on The manuscript library has some artistic reimaginings of the original arrangement (no contemporary images survive).

Cotton commonly inscribed his name in his books (Tite, The manuscript library pp.8-9 reproduces a number of typical examples). He used several armorial stamps on his bindings (fewer of these survive than might be expected, due to later repair in the British Museum).

Retrieved from ‘https://bookowners.online/index.php?title=Robert_Cotton_1571-1631&oldid=23277’
Categories:
This page was last modified on 17 August 2022.
Content is available under CC BY-NC 4.0 unless otherwise noted.