Son of Mary, Queen of Scots; King of Scotland from 1567 and of England 1603-1625, succeeding Elizabeth I. He married Anne of Denmark in 1589, who gave birth to their first son, Henry prince of Wales, in 1594 and to prince Charles, future king of England Scotland, and Ireland, in 1600. James authored various works, including Daemonologie (1597) and Basilikon Doron (1599), and commissioned the King James Bible. Historians have commented on his political as well as scholarly skills; his interests extended (among other things) to witchcraft and hunting. 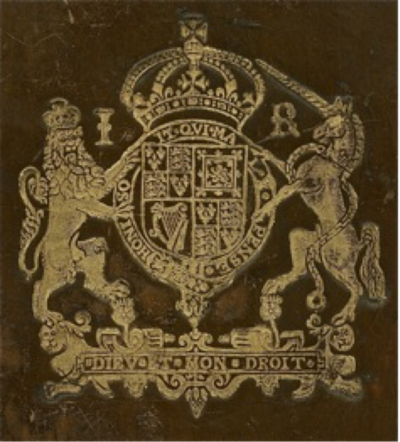 Armorial stamp of James VI and I (British Armorial Bindings).

George F. Warner estimates that by 1578 James' personal library held around 600 volumes, a number that continued to grow as he accumulated part of his mother's library and obtained books that were bought for him by his tutors. In 1614, he acquired 350 books from the library of Isaac Casaubon. James' personal library was wide-ranging while also encompassing books on hunting and hawking, witchcraft, tobacco, ephemera, and the affairs of the Palatinate. He collected ephemera and was the first monarch to assemble printed dossiers, including books written by those who wrote against him. He gave 228 books to St Andrews University, founding the King James Library there in 1612. The Royal Library was bequeathed by King George II to the British Museum in 1757; Birrell writes that 'a student working in the British Library on the political and religious thought of the Jacobean age will find that many of the books he is using, especially the more esoteric ones, are James's own copies', and that the study of James' library is 'an essential adjunct to the study of the monarch himself'.

Books from James’s library are generally recognised by the use of one of numerous armorial bindings stamps associated with him. British Armorial Bindings records 35 examples of books with James' stamps. The use of royal armorial binding does not necessarily point to personal royal ownership, and some of the stamps are known to have also been used by Charles I and Charles II. He annotated a copy of the first English edition of his book on the Oath of Allegiance. British Library C.45.d.230 (I).

Retrieved from ‘https://bookowners.online/index.php?title=James_VI_and_I_1566-1625&oldid=22117’
Categories:
This page was last modified on 28 January 2023.
Content is available under CC BY-NC 4.0 unless otherwise noted.