Born at Stirling Castle, eldest son and heir apparent of James VI and I and Anne of Denmark; elder brother of prince Charles, future king Charles I and princess Elizabeth, future electress of the Palatinate and queen of Bohemia. Created duke of Rothesay, Great Steward and prince of Scotland at his baptism in 1594. Matriculated at Magdalen College, Oxford in 1605, but did not graduate. Made duke of Cornwall following his father’s accession to the English throne in 1603 and was installed prince of Wales and earl of Chester in 1610. In the same year he funded a new library gallery for St James’s Palace, which was gifted to him by James in 1604. The library gallery was fitted, in part, to house the collection of John, Lord Lumley (ca.1533-1609), which the prince had recently acquired. Henry was hugely popular, and his early death in 1612 was widely mourned. 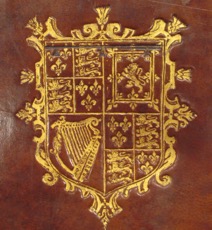 Lumley’s library included the books of Henry Fitzalan, 12th Earl of Arundel, and many of those of Thomas Cranmer, Archbishop of Canterbury. There is no record that Lumley’s library was purchased by either James or Henry, and Jayne & Johnson suggested that it was most likely gifted. The Lumley library passed to Charles, and later into the Royal Library. However, excluding the Lumley collection, T. A. Birrell estimated that Prince Henry’s library ran to roughly 1,000 titles in the Royal Library catalogue. In addition to this, Henry owned a travelling library of miniatures, and ‘numerous other volumes’ have ‘turned up in other libraries’. Henry’s library was wide-ranging, encompassing books on law, modern and classical history, geography, travel, military literature, as well as Latin and Greek schoolboy classics. Birrell described the library as ‘carefully selected to widen the interests of an intelligent young man in whatever directions he wanted to follow’. The Royal Library was bequeathed by King George II to the British Museum in 1757, so many of Prince Henry’s books are now in the British Library.

Retrieved from ‘https://bookowners.online/index.php?title=Henry_Frederick,_Prince_of_Wales&oldid=22679’
Categories:
This page was last modified on 24 June 2022.
Content is available under CC BY-NC 4.0 unless otherwise noted.