Born at Geneva, son of Arnaud Casaubon, pastor in the reformed church there. He attended the University of Geneva, where he was appointed professor of Greek in 1582. Soon afterwards he began publishing what became a long series of scholarly editions of classical authors which established his reputation as one of the foremost European scholars of his generation. He moved to the University of Montpellier in 1596 and to Paris in 1600 (he became keeper of the royal library there in 1605). The French political climate became increasingly hostile to protestants, and in 1610 he accepted an invitation to move to London, where he became acquainted with many leading churchmen and academics, and was encouraged by James I. He was made a prebendary of Canterbury and given a state pension, but while his final years continued to be productive, he lamented the more restricted access to books in England (he had to leave part of his library in Paris), and his classical philological work was largely replaced by writing contributions to the doctrinal controversy between the Roman church and the Church of England. 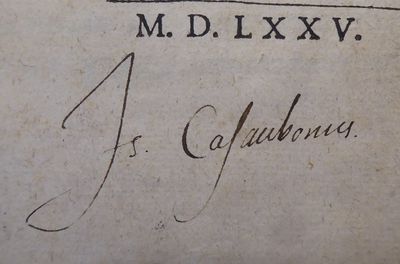 Casaubon was a keen acquirer of books, to support his scholarly work, throughout his life. An inventory made at the time of his move from Geneva to Montpellier in 1596 shows that he then had around 500 volumes. When he moved to London in 1610, he brought some, but not all, his books with him; by the time of his death, he had ca.1200 volumes in London, while ca.850 remained in Paris. They were gradually dispersed, from then onwards; many were retained by his widow and son Meric (who also brought some of the Paris books over to England), but the value of Casaubon's books, for both contents and annotations, was quickly recognised. Many books were bought for the Royal Library soon after Casaubon's death (and are therefore now in the British Library). 61 volumes of his adversaria were bequeathed to the Bodleian Library by Meric in 1671. Edward Bernard’s Catalogi manuscriptorum, 1697, lists 110 manuscripts which belonged to Casaubon. Around a fifth of his total library is thought to be traceable today. 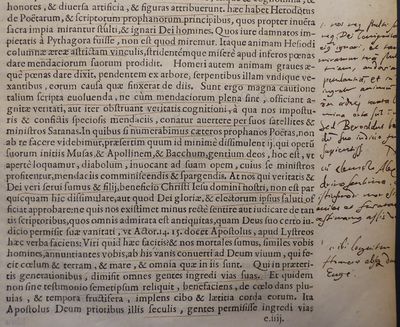 Casaubon regularly inscribed his name on his titlepages, "Is. Casaubonus" or similar. He often annotated his books extensively.

Retrieved from ‘https://bookowners.online/index.php?title=Isaac_Casaubon_1559-1614&oldid=22336’
Categories:
This page was last modified on 21 April 2022.
Content is available under CC BY-NC 4.0 unless otherwise noted.