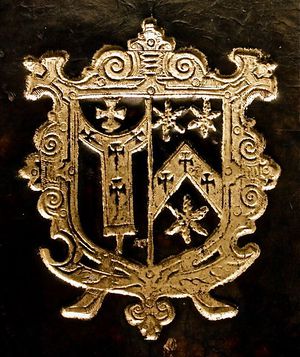 Laud was keenly interested in the importance of books and libraries, not only for his personal use but also as essential parts of the educational infrastructure which he believed to be necessary for church and state. He devoted much money and energy to the development of the Library of St John’s College, Oxford, and to the Bodleian Library, and he acquired many books with the express purpose of building those collections.

We know less about his personal library than we do about these great donations. He certainly acquired books throughout his life and after he was imprisoned in 1641 a distinction was made between “the Publick Library at Lambeth” (i.e. the accumulated books of George Abbot and his other predecessors) and “his Grace’s Library”, both of which were given Parliamentary protection. 97 books from Laud’s collection were taken in 1644 for the use of the Westminster Assembly of Divines, and some of his books were used at his trial with the intention of demonstrating his popish leanings. Laud intended, in his will, that the books remaining in his study at his death should be given to St John’s, but in June 1644 the House of Lords ordered that the entire collection, then valued at £140, should be given to Hugh Peter, chaplain to the army. Its subsequent fate is not known, though there is an entry in the Commons Journals in May 1660, after Peter’s condemnation, “that all the books and papers, heretofore belonging to [Laud] … be forthwith restored.”

Laud’s support of institutional collections began in the 1610s, when he became President of St John’s. His first book donation to the College is recorded in 1610, and he gave small numbers of books in later years. During his Presidency, the College Library was the subject of some activity, including the creation of a Donors’ Book and the selling of duplicates to raise book purchase funds, and he may have been the catalyst for this. His major benefaction to the College came in the 1630s, when he funded the building of Canterbury Quadrangle, at a cost of over £5000, including a new library wing over the east cloister. In 1635, he issued instructions for this “inner library”, which was to be used to house manuscripts, valuable books and scientific instruments.

His great gifts of books themselves constituted a series of donations of manuscripts to the Bodleian Library; between 1635 and 1640 he gave ca.1250 manuscripts, in four installments, comprising European, Greek, central American and oriental texts. They included various celebrated highlights like a 7th-century Greek manuscript of the Acts of the Apostles (ms Laud Gr.35), and the 12th-century Peterborough Abbey copy of the Anglo-Saxon Chronicle (ms Laud Lat.636), but also a huge variety of other material and constitute one of the most significant additions to the Library in its early decades. Many of the manuscripts were obtained for Laud by agents working overseas, who were on his instructions to obtain such material; from 1634, ships sailing on Turkey Company business were required to return with at least one Arabic or Persian manuscripts for Laud. In 1638 John Greaves, Geometry Professor at Gresham College, was sent to Alexandria and Constantinople to collect manuscripts for Laud. He also acquired large batches of manuscripts from German religious houses during the 1630s, when they were being looted during the Thirty Years’ War. As well as donating books himself, he was active in encouraging others to do so; it was through his agency that the Earl of Pembroke gave the Barocci manuscripts to the Bodleian in 1629, and that Sir Kenelm Digby gave Thomas Allen’s manuscripts to the Library in 1634. He also fostered the printing of learned Greek texts in London, by commuting the fine for the King’s printers, for producing the “Wicked” Bible, into a commitment to procure a Greek type fount.

The manuscripts given to the Bodleian were typically bound in calf with one of two gilt armorial stamps of Laud’s arms applied, and an inscription in the hand of one of his secretaries showing the date of acquisition. Numerous copies of the 1639 edition of A relation of the conference between William Laud and Mr Fisher the Jesuit exist also bearing the armorial, but these are clearly not signs of personal ownership. Other books with the armorial, which presumably were from his personal collection, are found in various libraries. Examples: St John’s, Oxford F.3.16; Worcester College, Oxford C.1.1-6; Lambeth Palace Library N307.C1636; York ML XIV.E.21; Harvard, Houghton Library WKR 17.5.18.

Retrieved from ‘https://bookowners.online/index.php?title=William_Laud_1573-1645&oldid=19903’
Categories:
This page was last modified on 15 May 2021.
Content is available under CC BY-NC 4.0 unless otherwise noted.