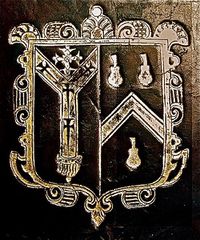 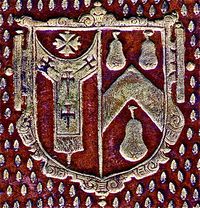 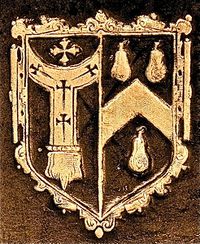 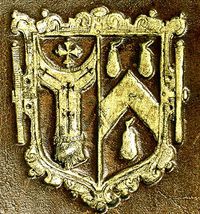 Born at Guildford; B.A. Balliol 1582, fellow 1583, M.A. 1585, B.D. 1593, D.D. 1597. Master of University College, 1597-1610; Dean of Winchester 1606; Bishop of Lichfield and Coventry 1609; of London, 1610; Archbishop of Canterbury, 1611-33. A mixture of hard work, scholarly and political ability, and influential patronage ensured the steady advancement of Abbot’s career and good standing in the eyes of James I. His archiepiscopate was a troubled one as he became an isolated figure whose Calvinist leanings were increasingly out of tune with the court and the Laudian wing of the Church. His last decade was further blighted by the accidental killing of a gamekeeper in 1621, while out hunting.

Abbot inherited, at Lambeth, one of the largest library collections of the time, more than 6000 volumes left by his predecessor Bancroft, to which he bequeathed a further 2670 volumes. Abbot acquired and valued books throughout his career; he organised the cataloguing of the Lambeth collection, and during his lifetime he gave books or money to buy them to St Andrews University, Balliol College and University College. He made small bequests of books to Canterbury and Winchester Cathedrals, as well as his main gift to Lambeth Palace Library. His book buying was wide ranging and took in a broad range of historical, scientific and contemporary writing beyond the obvious theologically-related material; he also acquired many books relating to France. Examples: Bodleian Library 8vo.B.12.Th.Seld, Cambridge UL Rel.d.54.27, Durham UL R.XLVI.E.23, and the bulk of the collection at Lambeth Palace Library.

Only rarely inscribed his books (although the books given to Lambeth Palace were marked “G C”). Abbot’s books are typically found in fairly plain contemporary calf bindings, gilt-stamped with his armorial as Archbishop on the covers; some more elaborately bound volumes, also with the armorial, also survive.

Retrieved from ‘https://bookowners.online/index.php?title=George_Abbot_1562-1633&oldid=19448’
Categories:
This page was last modified on 24 April 2021.
Content is available under CC BY-NC 4.0 unless otherwise noted.