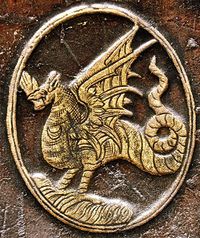 Son of Henry Herbert, 2nd Earl of Pembroke (d.1601). Matriculated at New College, Oxford in 1593; awarded MA in 1605. made high steward of the duchy of Cornwall, lord warden of the stannaries and lord lieutenant of Cornwallin 1604. Elected chancellor of the University of Oxford in 1617; Lord Chamberlain from 1615 to 1625. He is notable as a patron of the arts, patronising such figures as Ben Jonson, George Chapman, Richard Burbage and Inigo Jones.

Books with his armorial stamps survive. Bought the Barocci collection of Greek manuscripts in 1629, most of which he gave to the Bodleian Library.

Retrieved from ‘https://bookowners.online/index.php?title=William_Herbert_1580-1630&oldid=22103’
Categories:
This page was last modified on 27 March 2022.
Content is available under CC BY-NC 4.0 unless otherwise noted.