Born (probably) in London, son of a clergyman who died soon after his birth. His education relied mainly on Westminster School ; after spending some years following his stepfather's trade as a bricklayer, he joined the army in The Netherlands in the early 1590s, before returning to London to become an actor. His own plays began to bring success, with Every man in his humour (1598) establishing his reputation (that year, he was nearly executed for killing a man in a duel). By the time of James I's accession in 1603 he was recognised as a leading poet and playwright, and further successful plays followed (e.g. Sejanus, 1604; Volpone, 1606, The Alchemist, 1610)). In 1612 he travelled in Europe as a tutor to Sir Walter Ralegh's son. The publication of his collected Workes in 1616 "consolidated his position as England's foremost living author" (ODNB). He was favoured by James I and involved in court life; his fortunes waned somewhat under Charles I but he continued to write plays and poems until the end of his life.

Jonson acquired books throughout his life, although he is known to have lost some in a fire in 1623; he sold some during his lifetime to raise money, and the rest were dispersed after his death, so survivors are now widely spread around the world. David McPherson's work (see below) identified just over 200 books known to have been owned by Jonson; subsequent work has increased that number to around 300. The books are mostly in English or Latin, with many classical and literary titles. 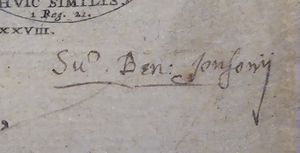 Jonson regularly inscribed his titlepages with his name (typically "Su[m] Ben: Jonsonij"), and the motto ‘Tanquam explorator’ ("like an explorer"). His books are sometimes annotated, sometimes with textual marginalia, more often with underlining or marginal symbols.

Retrieved from ‘https://bookowners.online/index.php?title=Ben_Jonson_1574-1637&oldid=21354’
Categories:
This page was last modified on 16 December 2021.
Content is available under CC BY-NC 4.0 unless otherwise noted.