BA Peterhouse, Cambridge 1563; MA and fellow 1566; expelled 1573, for preaching a controversial sermon against episcopacy. Became chaplain to Lord Cheney, and to the Duchess of Somerset; preacher to Lincoln’s Inn 1581-93, when he was suspended for his puritan views. Published a number of anti-Jesuit tracts in the early 1580s. Died, and buried, in London. Surviving letters from Chark to Abraham Ortelius from the 1580s refer to the search for, supply and exchange of books.

Chark had a significant library which is not now well documented; it appears to have been dispersed soon after his death and Chark books can now be found in many historic collections around the UK and further afield. He owned a number of manuscripts, including two early Greek Biblical manuscripts (Codex Leicestrensis and Codex Montfortianus), and 5 manuscripts subsequently owned by Cotton. At least 150 printed books of his can be traced today; there undoubtedly are, or were, many more. Examples: British Library 1197.a.12, C.74.c.7; Bodleian Library V1.1.Th.Seld., 8o.H.40.Art.Seld., Cambridge UL H*.4.29, F*.11.18, Durham UL Cosin A.V.9, and many others; National Library of Scotland K.34.f; Westminster Abbey P.5.5, and many others. 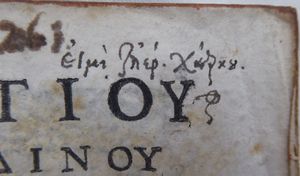 Chark commonly inscribed his books “Sum Guil. Charci”, or, in his Greek books (of which he had many), in Greek; he sometimes added a price or date of acquisition, and used flyleaves for notes. His tract volumes sometimes have multicoloured leaf edges.

Retrieved from ‘https://bookowners.online/index.php?title=William_Chark_d.1617&oldid=22137’
Categories:
This page was last modified on 27 March 2022.
Content is available under CC BY-NC 4.0 unless otherwise noted.