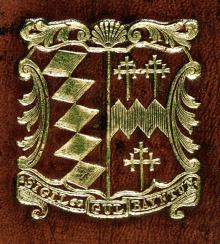 Younger son of Henry Bayntun, of Wiltshire. After being admitted at Gray's Innhe became a barrister in 1760. Through his wife, Catherine Sandys, he acquired appreciable estates. He was a fellow of the Society of Antiquaries.

Bayntun assembled a significant library, auctioned in London beginning 5 June 1787. His extensive will has no mention of books; much of his estate was inherited by his wife's relatives Edwin and Windsor Sandys. A two-volume manuscript catalogue of black-letter and other pre-1600 books in his library survives in the Bodleian Library (MSS Eng.Misc.e.80-1).

Bayntun commonly marked his books with armorial binding stamps (including one of his main arms, and a crest tool used on spines), and inscribed his name on titlepages.

Retrieved from ‘https://bookowners.online/index.php?title=William_Bayntun_1717-1785&oldid=23403’
Categories:
This page was last modified on 2 September 2022.
Content is available under CC BY-NC 4.0 unless otherwise noted.