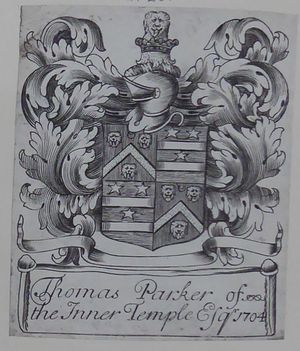 Born at Leek, Staffordshire, son of Thomas Parker, an attorney there and member of a minor gentry family. After a period of being articled to his father, he was admitted at the Inner Temple in 1684 and became a barrister in 1691. He developed a successful legal practice in Derbyshire before moving to London ca.1700 where he quickly gained a reputation as an able lawyer; he became a sergeant-at-law, and was knighted, in 1705. He was MP for Derby 1705-10 and heavily involved in Whig politics (including the trial of Henry Sacheverell in 1710). In 1710 he was appointed Lord Chief Justice, and in 1718 Lord Chancellor; he was created Earl of Macclesfield in 1721. In 1725 the political tide turned against him and he was impeached for financial corruption, and selling offices; although he protested his innocence, the trial did seem to establish that he had indulged in venal practices beyond the accepted conventions of the time. He then retired to his estate at Shirburn Castle.

Beyond his legal and political career, Parker was known for his wide range of interests, and intellectual pursuits; he patronised numerous scholars, and had an extensive network of contacts and correspondents among leading thinkers and scientists. He was elected a fellow of the Royal Society in 1712.

Parker acquired books all his life, and developed an extensive library. It was significantly augmented by his son the 2nd Earl, George (ca.1697-1764), and to some extent by his son Thomas, the 3rd Earl, and by the middle of the 18th century contained at least 20,000 books; its size at the time of Thomas's death has not been estimated. During both their lifetimes, significant collections were taken in from the libraries of others, including the Welsh mathematician William Jones (1675-1749), who was tutor to the 2nd Earl, and Sir Thomas Clarke (1703/4-64), Master of the Rolls, whose early career had been supported by the 1st Earl and who left much of his estate to his grandson the 3rd Earl. Parker is known to have bought extensively at book sales during the early 18th century. He used a series of engraved armorial bookplates during the earlier part of his career, the first one dated 1704 (Franks 22703, 22737-9/*201, 22741).

The Shirburn Castle Library remained largely intact and undisturbed after the later 18th century, as left at the end of the lifetime of the 3rd Earl. It was sold at Sotheby's in a series of 13 sales, 2004-09, in which the history and contents of the library were well documented and illustrated. Although various subject fields were highlighted as particular strengths - including science, mathematics, law and natural history - the library was very wide-ranging across the entire spectrum of knowledge. The books are now therefore widely dispersed in personal and institutional libraries around the world.

Books from the Macclesfield Library are usually most immediately recognisable from the 19th-century bookplates which were placed in them around 1860, usually reading "North Library" or "South Library" with a manuscript shelfmark added; at this time, a small blind embossing stamp was also added to most of the titlepages and other preliminary leaves. The books variously (but not always) carry the markings of whichever Earl was responsible for their acquisition, and of previous owners. The library included many books in luxury or better than average quality bindings, though many were also brought in with more ordinary calfskin bindings, with some level of gilding on the spine.

Retrieved from ‘https://bookowners.online/index.php?title=Thomas_Parker_1667-1732&oldid=23187’
Categories:
This page was last modified on 10 August 2022.
Content is available under CC BY-NC 4.0 unless otherwise noted.