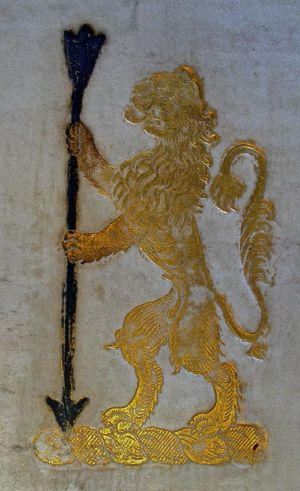 One of the armorial stamps of Thomas Egerton (British Armorial Bindings)

Illegitimate son of Sir Richard Egerton of Ridley, Cheshire, landowner. He matriculated at Brasenose College, Oxford in 1556 but did not graduate; admitted at Lincoln's Inn 1560 (barrister 1572). He developed a successful legal practice, and was appointed Solicitor General in 1581, and Attorney General in 1592. He was an MP during the 1580s, and knighted, and made Master of the Rolls in 1594, and Lord Keeper in 1596. James I raised him to the peerage as Baron Ellesmere in 1603, and made him Lord Chancellor. Troubled by illness in his later years, he resigned his offices shortly after being made Viscount Brackley in 1616. He was much involved in legal policy and state affairs under Elizabeth and James I, retaining their trust and upholding their policies.

Egerton acquired books throughout his life, and laid the foundations of the family library which was built up over succeeding generations and became known as the Bridgewater Library. The Library began to be dispersed in the 19th century and a significant portion of it (ca.4400 volumes) was purchased by Henry Huntington in 1917, and is now in the Huntington Library in California.

The size of the library at the time of Brackley's death is not known, but is estimated as having run to many hundreds of books, perhaps over a thousand. A travelling library presented to him in 1615 - 44 small format volumes in uniform vellum bindings, in a book-shaped box - survives in particularly fine condition. Examples: many in the Huntington Library.

Many books with Egerton's extensive annotations survive in the Huntington Library. Numerous books survive with one of several armorial stamps attributed to him.

Retrieved from ‘https://bookowners.online/index.php?title=Thomas_Egerton_1540-1617&oldid=20681’
Categories:
This page was last modified on 8 August 2021.
Content is available under CC BY-NC 4.0 unless otherwise noted.