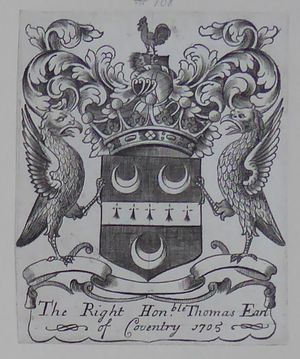 Son of Thomas Coventry, 1st Earl of Coventry, politician and landowner. He succeeded to the title on his father's death in 1699. Deputy Lieutenant of Worcestershire 1690, Recorder of Coventry.

Coventry used an engraved armorial bookplate dated 1705, Franks *108; the extent and disposition of his library are not known.

Retrieved from ‘https://bookowners.online/index.php?title=Thomas_Coventry_d.1711&oldid=20458’
Categories:
This page was last modified on 8 July 2021.
Content is available under CC BY-NC 4.0 unless otherwise noted.