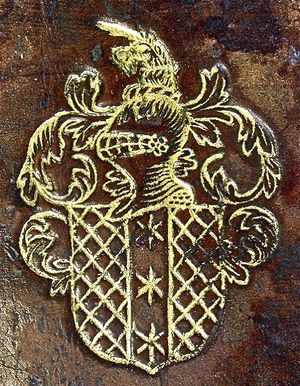 Of Knutsford, Cheshire, was admitted at Lincoln’s Inn in 1572 and subsequently pursued a legal career, becoming one of the Six Clerks in Chancery in 1604. He was MP for Andover in 1604 and around that time bought Heath House, near Petersfield, Hampshire.

A small number of late 16th and early 17th century books survive with an armorial Antrobus stamp, thought likely to have been made for his son, Thomas, (the latest known imprint is 1616). Thomas senior gave a small number of books to Lincoln’s Inn in 1605 and 1609, which have his arms painted inside as well as a donation inscription. In his will, the younger Thomas directed that all his books should go to his cousin Robert Antrobus, except for ten books for his daughter Elizabeth, "such as she shall choose and best like of". Examples: Bodleian Douce V.242, Douce I.122; Cambridge UL Syn.3.61.5; Senate House Library [G.L.]1616.

Apart from the armorial stamp, surviving books do not show Antrobus inscriptions

Retrieved from ‘https://bookowners.online/index.php?title=Thomas_Antrobus_d.1611&oldid=14829’
Categories:
This page was last modified on 27 July 2020.
Content is available under CC BY-NC 4.0 unless otherwise noted.