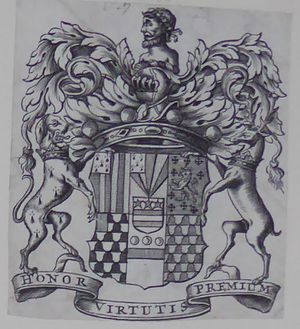 Born at East Sheen, Surrey, son of Sir Robert Shirley 4th bt of Staunton Harold, Leicestershire and Catherine Okeover. Became 7th bt 1669-1677, 14th Baron Ferrers of Chartley 1677-1711, and in 1711 Viscount Tamworth and thereafter Earl Ferrers. Matriculated at Christ Church, Oxford in 1667; M.A. 1669. Colonel of Anne of Denmark’s Regiment of Foot 1685-6. He held a succession of court and official posts, amongst them Dowager Queen Catherine of Braganza’s Lord Steward 1685-1705, and High Steward of Staffordshire, and he became a Privy Counsellor in 1699. As well as Staunton Harold, he acquired through inheritance and marriage estates at Tamworth, Staffordshire, Ettington, Warwickshire and Garsdon, Wiltshire, amongst others, and in 1711 bought extensive land and a large mansion in Twickenham, Middlesex, where he spent much of his later life. Married 1. Elizabeth Washington; 2. Selina Finch. He was father of Washington Shirley, 2nd Earl Ferrers and many other children; grandfather of Ferrers Shirley and Robert Shirley (1692-1714).

During rebuilding of his seat at Staunton Harold, Ferrers arranged for the conversion of the northern front of an older manor house into a library. In his will he stipulated that ‘my library of books at Staunton Harold’ should ‘continue in the library there, for the use and benefit of such of my family as for the time being shall be entitled to the freehold of my manor, … and not to be disposed of by them or any of them … but continue as heir-looms for their use’ (quoted Shirley, p. 171). Removal was permissible only in circumstances of fire or accident. He is believed to have added considerably to the books accumulated by his great-grandather and other forbears (e.g. Sir Thomas Shirley). A catalogue of the Staunton Harold library (Leicestershire, Leicester and Rutland Record Office, 26D53/2668) might cast further light on his books, but it was taken in 1834, long after further rebuilding of the house. Some of the family’s books were sold at Sotheby’s on 16 Dec 1929.

Retrieved from ‘https://bookowners.online/index.php?title=Robert_Shirley_1650-1714&oldid=23460’
Categories:
This page was last modified on 12 September 2022.
Content is available under CC BY-NC 4.0 unless otherwise noted.