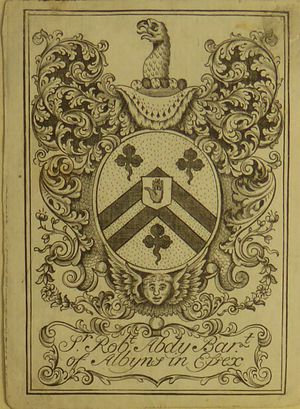 Son of Sir John Abdy, 2nd bart, of Albyns, Essex, from whom he inherited the title and family estates in 1691. Matriculated at Trinity College, Oxford 1705, but did not graduate. MP for Essex 1727-48; he was a Jacobite, and would have had a leading part in the planned French invasion of 1744, had it proceeded.

The family library at Albyns dated back at least to the time of the 1st baronet and Abdy is likely to have inherited books. He used an engraved armorial bookplate (Franks 40), but we do not know the extent of his additions to the library, which will have passed in turn to his son John, 4th bart, who used the same bookplate with the name altered. The baronetcy became extinct in 1759, when the family property passed to Stotherd Abdy (ca.1728-1773), rector of Thaydon Gernon, Essex, husband of the 4th baronet's sister Theodosia. His library was sold by Baker and Leigh in London in November 1775, as part of a mixed sale, when it is assumed that the Abdy of Albyns family books were dispersed.

Retrieved from ‘https://bookowners.online/index.php?title=Robert_Abdy_1688-1748&oldid=22931’
Categories:
This page was last modified on 12 July 2022.
Content is available under CC BY-NC 4.0 unless otherwise noted.