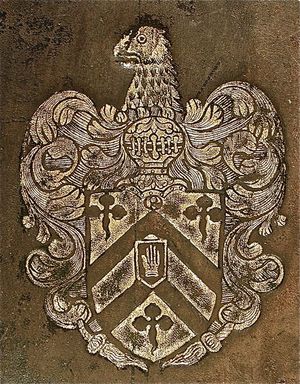 Born in London, son of Sir Anthony Abdy, alderman. His educational history is untraced and he is recorded as an East India merchant. He bought the estate of Albyns, Essex in 1654, having acquired other property in Essex by purchase and inheritance; Albyns became the family seat thereafter. He was created a baronet in 1660.

Two armorial book stamps are recorded as belonging to Abdy, each known from only one exemplar; one is an untraced copy of the 1657 polyglot Bible, listed in an Ellis catalogue of 1927, the other a copy of P. Arrighi, Roma subterranea, 1651, in the Clements Collection in the National Art Library (CLE Dr 1). Abdy's will is primarily concerned with the disposition of extensive lands and property and has no mention of books; all the residue of his goods and chattels were to go to his son John (2nd bart, 1643-1691). The baronetcy became extinct in 1759, when the family property passed to Stotherd Abdy (ca.1728-1773), rector of Thaydon Gernon, Essex, husband of the 4th baronet's sister Theodosia. His library was sold by Baker and Leigh in London in November 1775, as part of a mixed sale, when it is assumed that the Abdy of Albyns family books were dispersed.

Retrieved from ‘https://bookowners.online/index.php?title=Robert_Abdy_1616-1670&oldid=22932’
Categories:
This page was last modified on 12 July 2022.
Content is available under CC BY-NC 4.0 unless otherwise noted.