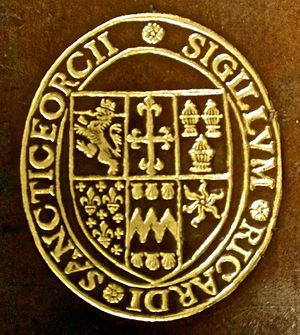 Born at Hatley St George, Cambridgeshire, son of Francis St George, a member of a long established gentry family there. Matriculated at St John's College, Cambridge 1575, but did not graduate. Became a member of the Society of Antiquaries founded ca.1586, and subsequently entered the College of Arms, where he became Berwick Pursuivant in 1602, and Norroy King of Arms in 1607. He carried out numerous visitations and in 1623 was promoted to Clarenceux King of Arms, on the death of William Camden. He was knighted in 1617.

Books, rolls of arms and manuscript collections were always part of the stock in trade of heralds, and numerous manuscripts either owned or written by him are now in the British Library, and the College of Arms. Printed books from his library also survive in various places. He had regular contact with many of the other antiquaries of early 17th century London, including Cotton and Camden, and John Weever, the compiler of Ancient funeral monuments, referred to St George's help. In his will, he bequeathed all his books and evidences in his study in Holborn, together with all the books, household stuff and other furniture in his chamber at the College of Arms, to his son Sir Henry St George (1581-1644); he also made a specific bequest of the large Church Bible in his Holborn study to the church of Hatley St George.

Retrieved from ‘https://bookowners.online/index.php?title=Richard_St_George_1554/5-1635&oldid=22861’
Categories:
This page was last modified on 12 July 2022.
Content is available under CC BY-NC 4.0 unless otherwise noted.