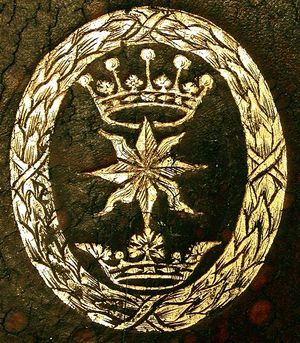 Born at Dorset House, London, son of Edward Sackville, 4th earl of Dorset, from whom he inherited the title in 1652. MP for East Grinstead 1640, but apparently took little part in the Civil War; he lived quietly during the Interregnum, having taken over an estate saddled with debts. Lord lieutenant of Middlesex 1660-62, member of the commission for trial of the regicides, and subsequently an active member of the House of Lords, chairing numerous committees. His politics are noted as firmly Episcopalian, while respecting diversity of opinion. He also had wide artistic and scientific interests; he contributed an elegy to a collection of poems in memory of Ben Jonson in 1638, later translated Pierre Corneille’s Le Cid, and became a Fellow of the Royal Society in 1665.

The dates of the bindings suggest that the books with armorial stamps attributed in the Armorials Database to Edward Sackville, 4th Earl, were actually made for the 5th Earl. About a dozen books are now known, in numerous libraries, from what was surely once a much larger collection. Subsequent ownership inscriptions support the theory that the books were dispersed in the late 18th century in Dorset/Sackville sales of 1769 and 1786. Examples: British Library C.48.d.18, Cambridge UL U*.8.126, National Art Library CLE O34, Trinity College, Dublin MM.mm.40.

Books are identifiable from the armorial stamp gilt-tooled on the covers; otherwise, surviving examples have no other inscriptions or annotations attributable to Sackville.

Retrieved from ‘https://bookowners.online/index.php?title=Richard_Sackville_1622-1677&oldid=23609’
Categories:
This page was last modified on 21 September 2022.
Content is available under CC BY-NC 4.0 unless otherwise noted.