Born in Westminster, son of Paul Neile, tallow chandler. BA St John's College, Cambridge 1584, MA 1587, BD 1595, DD 1600. Chaplain to William Cecil, Lord Burghley; vicar of Cheshunt, Hertfordshire 1590, rector of Toddington, Bedfordshire 1598, canon of Chichester 1604. Dean of Westminster 1605, Bishop of Rochester 1608, of Lichfield and Coventry 1610, of Lincoln 1614, of Durham 1617, of Winchester 1627, Archbishop of York 1632. Neile's steady career progress reflects his administrative competence, political skills, and good relations with James I; he was a leading figure in the rise of the Arminian movement in the Church of England, and he patronised and encouraged men who went on to be leading figures like William Laud, John Cosin and Augustine Lindsell.

The size of Neile's library is not known, but at least 20 books of his survive in York Minster Library, all given by Ferdinando, Lord Fairfax (and perhaps taken by him from Neile's palace at Cawood, after his death. Examples: York Minster Library VI.O.6, IX.L.1, XV.R.12. 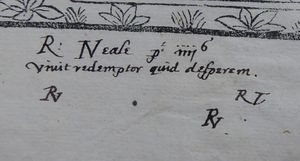 Retrieved from ‘https://bookowners.online/index.php?title=Richard_Neile_1562-1640&oldid=23118’
Categories:
This page was last modified on 9 August 2022.
Content is available under CC BY-NC 4.0 unless otherwise noted.