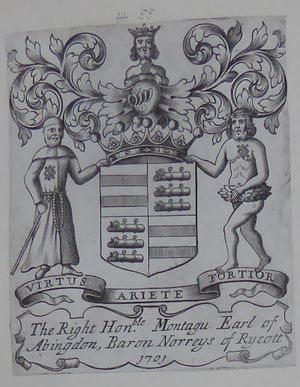 Son of James Bertie, 1st earl of Abingdon, from whom he inherited the title and family estates in 1699. Matriculated at Christ Church, Oxford 1685, but did not graduate. After his marriage in 1687 to Elizabeth Venables (great-granddaughter of Peter Venables), he changed his name to Venables-Bertie. MP for Berkshire 1689, for Oxfordshire 1690-99; he held a number of local administrative offices, and was Constable of the Tower 1702-05.

Venables-Bertie used an engraved armorial bookplate, dated 1701 (Franks *55). The extent of his library is not known; his lengthy will has no mention of books, and the earldom was inherited by his nephew Willoughby Bertie.

Retrieved from ‘https://bookowners.online/index.php?title=Montagu_Venables-Bertie_1673-1743&oldid=20068’
Categories:
This page was last modified on 22 May 2021.
Content is available under CC BY-NC 4.0 unless otherwise noted.