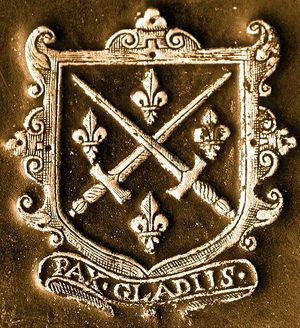 Son of William Barrow of Westhorpe, Suffolk. Matriculated at St John's College, Cambridge 1612, but did not graduate; admitted at Gray's Inn 1616. High Sheriff of Suffolk 1628, in which year he bought the manor and estate of Barningham, Suffolk from the widow of Henry Mason, MP and lawyer. Suffolk receiver for the Dean & Chapter of Canterbury both before and after the Civil War. Barrow was reputed to be one of the wealthiest commoners of his time and his house at Barningham (also known as Brackland Park) was registered as having 33 hearths in the mid-17th century.

Barrow is included in the armorials database on the basis of one book given by him to Canterbury Cathedral Library ca.1636, decorated with his arms. There is no record of personal book ownership; his will, which includes extensive disposals of estates, money and property, has no reference to books although various kinds of goods and chattels are mentioned (e.g. jewels, bedding, plate, livestock). The bulk of his estate went to his godson and cousin Maurice Shelton (d.1676), who erected an elaborate memorial to Barrow in Westhorpe church.

Retrieved from ‘https://bookowners.online/index.php?title=Maurice_Barrow_1597/8-1666&oldid=22948’
Categories:
This page was last modified on 12 July 2022.
Content is available under CC BY-NC 4.0 unless otherwise noted.