Born in London, in the parish of All Hallows Barking, son of Thomas Andrewes, mariner. BA Pembroke College, Cambridge 1575, fellow 1576, MA 1578, BD 1585, held various college offices before becoming Master of Pembroke, 1589. Vicar of St Giles, Cripplegate 1588, prebendary of St Paul’s and of Southwell 1589, of Westminster 1597; Dean of Westminster 1601. Royal almoner, and Bishop of Chichester, 1605, of Ely 1609, of Winchester 1619-26. Widely admired by his contemporaries for his preaching and his piety; influential in the development of the Arminian, anti-Calvinist theological orthodoxy shaped more actively by Laud after Andrewes’s death. His posthumously published Preces privatae (1648) were long respected as a manual of Anglican private devotion; Tortura Torti (1609), directed against Cardinal Bellarmine’s Responsio Matthaei Torti, was a significant contribution to the Anglican/Catholic controversy of the time.

Andrewes accumulated a library of some size, whose full extent is unknown. He bequeathed all his folio volumes to Pembroke, and ca.400 volumes were received, most of which are still there; it is not clear what happened to the rest. The subject content of the Cambridge collection is: theology 205 vols; politics/law 51 vols; history/biography 88 vols; geography/travels 11 vols; dictionaries 14 vols; science/medicine 9 vols; miscellaneous other 20 vols. Examples: many in Pembroke, Cambridge; British Library ms Harl.6614, 6616; St John’s College, Cambridge Ss.2.21, Vv.5.13. 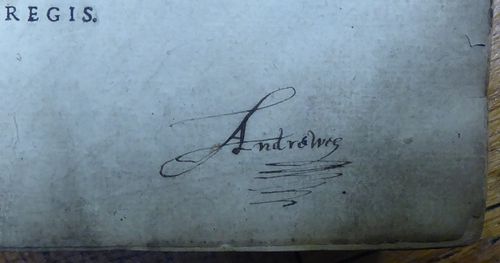 Andrewes sometimes inscribed his books with his name, and the motto “Et ad aratrum ad aram”; the books so marked typically date from the earlier stages of his career, in the 1580s/90s, after which he seems to have abandoned the habit. The Pembroke books include many gilt-tooled centrepiece bindings of the period.

Retrieved from ‘https://bookowners.online/index.php?title=Lancelot_Andrewes_1555-1626&oldid=21640’
Categories:
This page was last modified on 2 February 2022.
Content is available under CC BY-NC 4.0 unless otherwise noted.