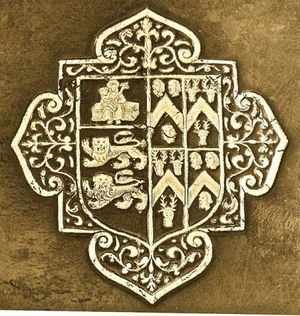 One of the armorial stamps of John Williams (British Armorial Bindings)

Son of Edmund Williams, of Conway. BA St John's College, Cambridge 1601, fellow 1603, MA 1605, BD 1613, DD 1617. Vicar of Honington 1605, Archdeacon of Cardigan 1610, royal chaplain 1617, Dean of Salisbury 1619, of Westminster 1620, Bishop of Lincoln and Lord Keeper 1621. Favoured by James I but not by Charles, he was increasingly at odds with the government and court thereafter, and in 1637 was fined, suspended from his benefices, and imprisoned in the Tower of London. Rapprochement followed and in 1640 he was made Archbishop of York; he was briefly imprisoned again, on parliamentary orders, before fleeing to York and then to Wales, where he spent most of the last 8 years of his life.

Williams was a major library benefactor, as well as someone who acquired books himself throughout his life. In 1623 he purchased the library of Sir Richard Baker for £500, to give to Westminster Abbey; this comprised ca.1700 books. Also in the 1620s, he provided significant funds to build a new library at St John's Cambridge (partly to house the recently acquired books of William Crashawe). He established a fund to buy £100-worth of books for St John's library annually from 1632, but obtaining these books, during the 1630s, proved difficult; after his rehabilitation in 1640 he asked for many to be returned to him at Westminster, and some of them also went with him to Wales. After his death, many books were recovered, but subsequently sold as being either duplicates, or in poor repair. There are only about 30 volumes at the College today which can be identified as Williams's, but books of his are now widely spread in libraries across the world. Various manuscript lists of his books and donations survive in the Library archives at St John’s. Examples: Cambridge UL Adv.a.48.4, N.8.26-7; Corpus Christi College, Oxford ST.1.213; York Minster XIV.E.6; and at St John's, Cambridge.

Many of Williams's books were marked with one of two armorial book stamps.

Retrieved from ‘https://bookowners.online/index.php?title=John_Williams_1582-1650&oldid=21904’
Categories:
This page was last modified on 13 March 2022.
Content is available under CC BY-NC 4.0 unless otherwise noted.