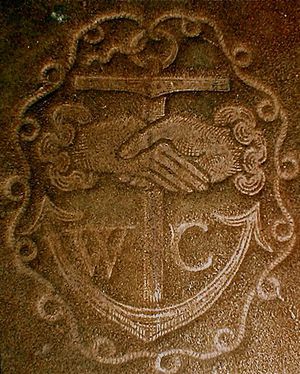 Born in Handsworth, Yorkshire, son of Richard Crashawe. BA St John’s College, Cambridge 1592, fellow 1594, MA 1595, BD 1603. Became a preacher in Yorkshire, at Bridlington and Beverley; Vicar of Burton Agnes 1600, chaplain to Baron Sheffield 1604, prebendary of Ripon 1604, preacher to the Inner and Middle Temples, 1605, where he was based residentially until the failure of these Inns of Court to pay his stipend from 1610 onwards forced him to move back north, to Burton Agnes, in 1613. Returned to London as Vicar of St Mary, Whitechapel, 1617, where he died. Noted for his preaching skills, he published numerous devotional and polemical (anti-Catholic) works.

Crashawe assembled one of the largest libraries of his generation, which he claimed in 1613 to be “one of the most complete libraryes in Europe (that of Oxforde excepted)”; it was then estimated to contain ca. 4000 printed books and 200 manuscripts, and to have cost £2000 to form. He offered the library for sale to the Middle Temple in 1613, needing to dispose of the books for financial and practical reasons (the move back north), but they declined. Cambridge University considered purchase (20s was spent on listing and valuing the books) but in 1614 Henry Wriothesley, Earl of Southampton, purchased a portion of the library to give to St John’s, Cambridge. The books did not arrive until 1626 or later and amounted to ca 1000 printed vols and 500 manuscripts, valued at £350, including a range of medieval texts from monastic sources across England. The content of the collection was strongly theological. Crashawe appears to have retained part of his library after 1614, and to have continued to acquire books thereafter. He bequeathed books to Ripon Minster, to Handsworth parish, and to members of his family. Books with his ownership markings are now found in many libraries, as well as the material at St John’s. Examples: British Library MS Harl. 207, 610.b.2; Cambridge UL G.4.89, G*.15.26 (G), Inc.5.4.A.17; Emmanuel College, Cambridge 334.3.71; Chetham’s Library, Manchester E.24.32, F.7.32; Marsh’s Library, Dublin M.1.5.38.

Crashawe commonly inscribed his name on titlepages, sometimes with a price and date of acquisition, together with the moto “Servire Deo regnare est”. He also used two binding stamps (the same design in different sizes), incorporating clasping hands in front of an anchor, with the initials W C.

Retrieved from ‘https://bookowners.online/index.php?title=William_Crashawe_1572-1626&oldid=20474’
Categories:
This page was last modified on 9 July 2021.
Content is available under CC BY-NC 4.0 unless otherwise noted.