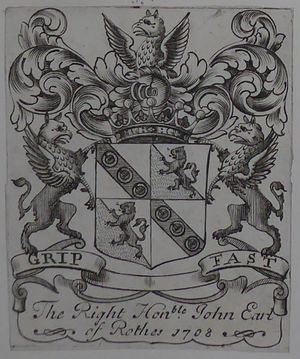 The eldest son of Charles Hamilton, 5th earl of Haddington (c.1650–1685), and Lady Margaret Leslie (d. 1700), elder daughter the 7th earl and first and only duke of Rothes, his formative years were spent at Leslie. On the death of his mother, he succeeded her as 9th earl of Rothes. He married the daughter of John Hay, 2nd marquess of Tweeddale.

He campaigned in the Scottish Parliament for the union of Scotland and England and was chosen as one of the sixteen representative peers of Scotland in the House of Lords. On the accession of George I, he was appointed vice-admiral of Scotland and lord high commissioner to the general assembly of the Church of Scotland. During the Jacobite rising of 1715 he fought bravely against Jacobite forces at Kinross, leading a detachment of the Scots Greys. The Jacobites raided Leslie House. At the battle of Sheriffmuir he commanded a body of sixty gentlemen volunteers. In acknowledgement the king made him governor of Stirling Castle in 1716.

Retrieved from ‘https://bookowners.online/index.php?title=John_Leslie_1679-1722&oldid=21580’
Categories:
This page was last modified on 26 January 2022.
Content is available under CC BY-NC 4.0 unless otherwise noted.