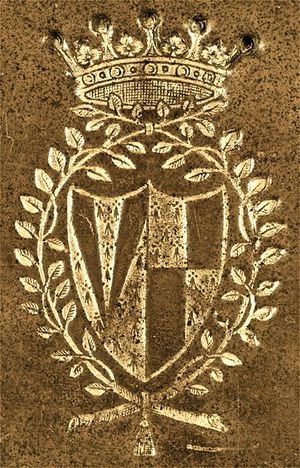 One of the armorial stamps of John Holles, Earl of Clare (British Armorial Bindings)

Son of Denzel Holles. Matriculated at Christ's College, Cambridge 1579, but did not graduate; entered Gray's Inn 1583. He inherited wealth and estates from his father in 1590, and was knighted during a military expedition with the Earl of Essex in 1593. MP for Nottinghamshire in 1604 and 1614, comptroller of Prince Henry's household 1610. He purchased the title Baron Haughton in 1616, and the Earldom of Clare in 1624. He added significantly to the family estates at Haughton, Nottinghamshire but was largely frustrated in various attempts to be appointed to significant state offices.

Holles was a learned man with an active interest in his library. His letters to his son between the 1610s and 1630s contain numerous references to seeking, obtaining or reading books, and a letter of 1618 shows him reading and comparing different translations of Aristotle. His nephew Gervase Holles described Clare's intellectual interests, and recorded that "after he had reasonably well checked his appetite, he would ever start some discourse either in divinity, philosophy or history". The size of the library which he passed on to his son (John Holles, 2nd Earl of Clare) is not known, but he is known to have had 500 or more books by the 1650s. Examples: National Art Library CLE J12, Cambridge University Library M.14.7-8, and see below.

Holles used 3 armorial stamps during his career, the first representing his status as a knight, the later two reflecting his position as Earl of Clare. His books are variously inscribed or annotated; some not at all (e.g. his copy of Ben Jonson's Workes, 1616, National Art Library CLE L11), others extensively (a copy of Samuel Daniel's Collection of the historie of England, 1617, Bodleian D.2.16 Art, presented to Holles by the author, has Holles's marginalia throughout).

Retrieved from ‘https://bookowners.online/index.php?title=John_Holles_d.1637&oldid=22110’
Categories:
This page was last modified on 27 March 2022.
Content is available under CC BY-NC 4.0 unless otherwise noted.