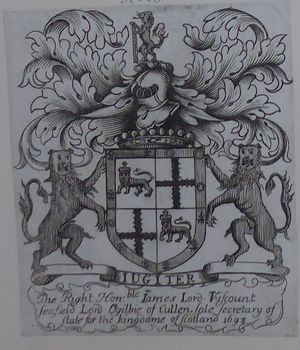 Son of James Ogilvy, 3rd earl of Findlater (d.1711). Educated at Marischal College, Aberdeen and in the Netherlands. He was admitted to the bar as an advocate in 1685 and sat in the Scottish Parliament 1689–1695. In 1693 he was knighted and appointed solicitor-general of Scotland. He was appointed president of the 1698 session of parliament and in 1701 was created earl of Seafield. He was appointed lord high chancellor of Scotland in 1702 and was one of the commissioners for the treaty of Union in 1706. He was subsequently one of the sixteen Scottish peers in the new parliament of Great Britain.

Retrieved from ‘https://bookowners.online/index.php?title=James_Ogilvy_1663-1730&oldid=23152’
Categories:
This page was last modified on 9 August 2022.
Content is available under CC BY-NC 4.0 unless otherwise noted.