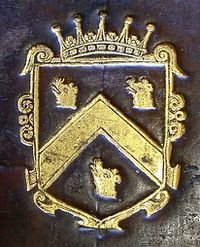 Son of Henry Ley (d.1589) and father of the poet Lady Hester Pulter. Matriculated at Queens' College, Cambridge as a pensioner in 1571 but graduated BA from Brasenose College, Oxford in 1574; entered Lincoln's Inn in 1577. He was utter barrister in 1584 and reader of Furnival's Inn. Appointed chief justice of king's bench in Ireland.MP for Westbury 1597, 1604, 1609, 1624 and for Bath in 1614. Made baronet in 1619 and Earl of Marlborough in 1626. He was a founding member of the Society of Antiquaries and was described by Richard Hutton as loving 'old silver and gold coin of the Romans and others'.

Ley bequeathed his books, manuscripts and works of art to his son, Henry. They remained in the family for several generations.

Books with his armorial stamps survive (typically on manuscripts rather than printed books).

Retrieved from ‘https://bookowners.online/index.php?title=James_Ley_1550-1629&oldid=21765’
Categories:
This page was last modified on 23 February 2022.
Content is available under CC BY-NC 4.0 unless otherwise noted.