The Finch family produced a number of peers, MPs and statesmen during the 17th century, many of whom left recorded traces of library ownership, while others who will certainly have owned books have not. This entry is largely replicated for each of the individual members as the movement of books between them, and down the generations, is not clear.

Moyle Finch, son of Sir Thomas Finch of Eastwell, Kent, was MP for several south coast constituencies between 1572 and 1601, and held various civic offices in Kent. He purchased a baronetcy in 1611 and his widow Elizabeth Heneage (1556-1634) was created Countess of Winchilsea in 1628. Of their children, the first son Sir Theophilus, 2nd baronet, died in 1619; the second son, Thomas (1578-1639) inherited the peerage title as 2nd Earl of Winchilsea, and the third, Sir Heneage Finch (1580-1631) had a distinguished legal career, including the offices of Recorder of London (1621-31) and speaker of the House of Commons (1626). He amassed considerable wealth and at the end of his life owned the estate in Kensington which later became Kensington Palace. Of his children, his first son, Heneage Finch (described in this entry) became Lord Chancellor in 1675, after a successful political/legal career after the Restoration as Solicitor General and Attorney General, and was made 1st Earl of Nottingham in 1681. A younger brother, Sir John Finch (1626-1682), studied medicine on the continent during the Interregnum and although elected FRS and FRCP in the early 1660s spent much of the rest of his life abroad, being English ambassador in Constantinople during the 1670s.

A small number of books are recorded with one of two similar armorial stamps used by Sir Moyle. Seven are listed in the armorials database with a stamp attributed to the Sir Heneage who was speaker of the Commons (d.1631), but as one of these books dates from 1666 this attribution is questionable, or the stamp continued in family use in some way. 13 books are listed using one of four stamps attributed to Heneage, 3rd Earl and two books are known with the coroneted monogram stamp used by Charles, 4th Earl. These last two books also carry an armorial bookplate made for the 4th Earl, dated 1704 (Franks 10492/*60). ODNB notes that many of the books of the physician Sir John Finch, bequeathed to Daniel, 2nd Earl of Nottingham/7th Earl of Winchilsea, were destroyed by a fire at the latter's house at Burley on the Hill, Rutland. Little is known about the library of Heneage, the Lord Chancellor described in this entry, though at least one of his books has been identified at the British Library (1130.c.4). 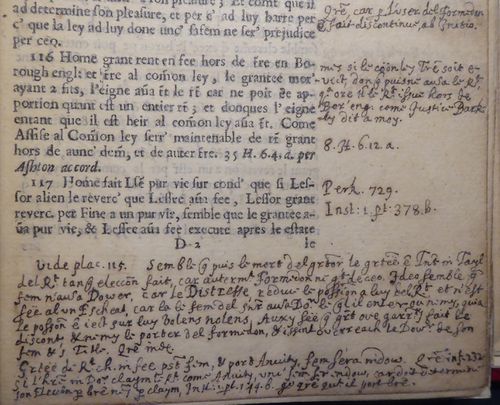 It is likely that books will have passed around and accumulated between these various generations and branches of the family, moving between multiple houses, in ways which cannot now be traced in any detail. Sir Moyle's will includes a wish that the household stuff and furniture at each of his houses should "continue to the houses". The will of the 3rd earl makes no reference to his books, but he bequeaths all of his goods and personal estate to his wife, Elizabeth, who was also his sole executrix.

In his will the 5th earl bequeaths all his possessions to his executors with the intention they should be sold, but makes exceptions for some items, including a number of his books. He requests that all volumes relating to his ancient medals and antiquities should not be sold, unless a later codicil should refer to them. He bequeaths his 'fine folio bible' to Lady Carteret. He also makes specific requests relating to his manuscripts, desiring that correspondence between him and his wife be burned, imperfect manuscripts in his hand be destroyed, and that manuscript poems composed by his wife, Anne, be 'carefully printed as she left them without any manner of alteration, her own words best expressing her own thoughts'. The major manuscript of her poetry, a large folio now at the Folger, came into the hands of the Creyk family by the 1740s and so remained until it was bought by Edmund Gosse.

In 1758 the library of "the late Right Honourable Heneage Finch, Lord Winchelsea", together with that of his chaplain John Creyke, "and many other considerable libraries" was sold by retail sale by Thomas Osborne in London. Two sale catalogues survive, dating the sale as beginning on 2 January (part 1) and 26 April (part 2). This sale is most likely linked to the 5th earl, rather than the 3rd. He is known to have been close friends with John Creyke, a clergyman of St Anne's, Westminster, who was named as an executor in his will. The 5th earl described this Creyke as his friend to Dr Stukeley, and Creyke in turn writes to Stukeley in September 1726, "This morning at five minutes before six I performed the doleful office of closing the eyes of my dear lord Winchilsea who died of the Iliac passion". This sale was evidently a time when many Finch family books came onto the market.

Retrieved from ‘https://bookowners.online/index.php?title=Heneage_Finch_1621-1682&oldid=22540’
Categories:
This page was last modified on 7 June 2022.
Content is available under CC BY-NC 4.0 unless otherwise noted.