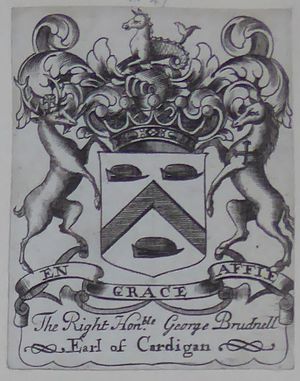 Son of Francis Brudenell, and grandson of Robert Brudenell, 2nd Earl of Cardigan; Francis died in 1698, before the 2nd Earl, from whom George inherited the title and family estates (principally Deene Park, Northamptonshire) in 1703. The family were Roman Catholic, and George was living in Rome at the time of his inheritance; he returned to England in 1706, and after converting to the Church of England, took his seat in the House of Lords. He undertook some modernisation of Deene Park, without significantly remodelling the house.

Brudenell inherited the extensive library of Deene Park (see Thomas Brudenell, 1st Earl of Cardigan); the extent to which he augmented it is not known, but he used two engraved armorial bookplates (Franks 4163, *47). The house and library were inherited by his son George, later 1st Duke of Montagu.

Retrieved from ‘https://bookowners.online/index.php?title=George_Brudenell_1685-1732&oldid=20205’
Categories:
This page was last modified on 6 June 2021.
Content is available under CC BY-NC 4.0 unless otherwise noted.