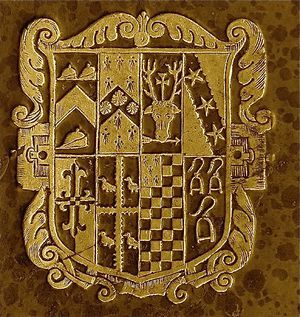 One of the armorial stamps of Thomas Brudenell (British Armorial Bindings)

Son of Robert Brudenell, of Diddington, Huntingdonshire, a member of a recusant gentry family. Matriculated at Gonville and Caius College, Cambridge 1593, but did not graduate; he inherited his father's estate in 1599 and a larger one at Deene, Northamptonshire from his uncle John Brudenell in 1606. In 1605 he married Mary, daughter of Sir Thomas Tresham of Rushton, whose library he inherited. He was made a baronet in 1611 and created Baron Brudenell of Stonton in 1628. He became Earl of Cardigan in 1661, in recognition for his support of the royalist cause during the Civil War, when he spent some time imprisoned in the Tower of London.

The Tresham library brought Brudenell many hundreds of books, but he was also an active purchaser of books from his Cambridge days onwards, and inherited books from other members of the Brudenell family. He continued to add to the library after 1605 and early inventories show that the combined Tresham/Brudenell library contained ca.1700 books in the early 17th century. Many of the books survive today at Deene Park; their contents and nature are analysed in detail by Barker and Quentin (see below), together with a full catalogue. The subject coverage is wide-ranging, embracing theology, philosophy, natural history, history, geography, mathematics, astronomy, lexicography and more. Only a small proportion are in English, or are English imprints. The library was sequestered in 1643, and removed from Deene to an unknown location, but it seems to have been largely protected and kept together, and returned to Deene in 1660.

Brudenell regularly inscribed and annotated his books. He used a number of armorial stamps, and many exemplars of these survive today at Deene Park.

Retrieved from ‘https://bookowners.online/index.php?title=Thomas_Brudenell_1578-1663&oldid=20126’
Categories:
This page was last modified on 24 May 2021.
Content is available under CC BY-NC 4.0 unless otherwise noted.