Born at Lichfield, son of Simon Ashmole, saddler. After a start in a legal career (he became a solicitor in Chancery in 1638), he became excise commissioner for Lichfield in 1644 and moved to Oxford in 1645, associated with the royalist garrison there but also attaching himself (without matriculating) to Brasenose College. Through contact with the astrologers George Wharton and William Lilly he became much interested in astrology, which became a lifelong pursuit. He was also a student of alchemy, the subject of his earliest publications (Fasciculus chemicus, 1650, and Theatrum chemicum Britannicum, 1652). Marriage to a wealthy widow in 1649 brought him the financial means to pursue his interests, and build collections, in earnest.

In 1652 he and Thomas Wharton catalogued the collection of curiosities formed by John Tradescant; the publication of this, at Ashmole’s expense, led Tradescant’s son to give the collection to Ashmole in 1659. A developing friendship with William Dugdale led to growing interests in heraldry and antiquarian studies; Ashmole became particularly interested in the Order of the Garter (his Institution, laws and ceremonies of the … Garter, 1672, is his most significant publication), and in 1658 began cataloguing the Roman coins in the Bodleian Library. He was awarded an MD by Oxford University in 1669. After the Restoration he was made comptroller of the excise for the City of London (1660), Windsor Herald (1660), and accountant general of the excise (1668). He was active in heraldic visitations until 1675, when he resigned that office. He became a Fellow of the Royal Society in 1661.

In 1675 he began successful negotiations with the University of Oxford to give the Tradescant Collection, on condition that a suitable building was erected; the Ashmolean Museum opened in 1683. Some material accumulated by Ashmole, additional to that of the Tradescants, which was intended for the Museum was destroyed by fire at the Middle Temple in 1679, including 9000 coins and medals. He continued to collect, however, and these further coins, mineral specimens and antiquities were added to the Museum after Ashmole’s death. 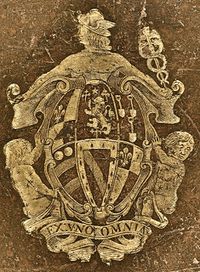 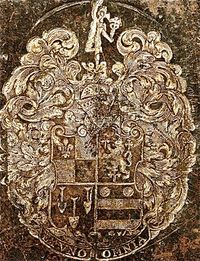 Ashmole built up extensive collections of printed books and manuscripts, many of which formed part of his legacy to the Ashmolean Museum. His will contains detailed instructions about his books, bequeathing them to the University, with categorizations by subject and location within his house, “to bee preserved in the Museum Ashmoleanum in presses with locks and keys to bee provided for them”. Some books (but not all his collection at that time) were destroyed in the 1679 fire. The Museum received, in 1692, ca. 1760 printed books and 620 manuscripts. These were transferred from the Museum to the Bodleian Library in 1860.

A significant proportion of Ashmole’s library at the time of his death was not selected for retention in Oxford, and an auction sale of the remainder was held in London by Edward Millington on 22 February 1694. The catalogue lists 1327 lots, divided between Latin miscellaneous (187), English miscellaneous (840) and 30 manuscripts. The subjects (though less carefully subdivided than is typical in catalogues of this time) are wide-ranging, and include history, geography, theology, science, medicine and astrology.

Ashmole developed his collection throughout his life, and is known to have acquired a number of collections en bloc, including those of the mathematician William Milbourne (1650), and the astrologers Nicholas Backhouse (1651), John Booker (1667, purchased from his widow for £140), Richard Saunders (1675) and William Lilly (1680, purchased for £50). In 1680 he was bequeathed books by the antiquary John Stansby. His manuscripts reflect his interests in heraldry and astrology, but they also include a number of illuminated medieval manuscripts, in which he appears to have been interested specifically for their illustrations.

Ashmole typically inscribed his titlepages with his name. His books are typically plainly bound, with his armorial in gilt. A couple of Ashmole manuscripts contain printed book labels, one of which is dated 1635.

Retrieved from ‘https://bookowners.online/index.php?title=Elias_Ashmole_1617-1692&oldid=19537’
Categories:
This page was last modified on 29 April 2021.
Content is available under CC BY-NC 4.0 unless otherwise noted.