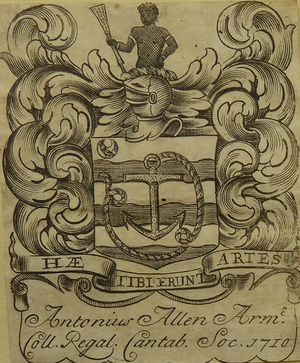 Born and baptized at Much Hadham, Hertfordshire fourth surviving son of William Allen (d. 1698), of Much Hadham, and his wife, Bridget James

Barrister and antiquary, by his will of 22 October 1753 he left to Arthur Onslow his unpublished work on the churches in Surrey and his account of the Middle Temple. Allen's junior clerk, Thomas Sibthorpe, was bequeathed £120 to transcribe Allen's catalogues of scholars educated at Eton College and at King's College, Cambridge. Two copies were to be made of the resultant five folio volumes, laid out according to Allen's plans, one to be presented to Arthur Onslow and the other to King's. Sibthorpe was bequeathed Allen's manuscript material on 'the degeneracy of words' (an English dictionary of obsolete words and those which have changed their meaning or assumed a proverbial usage), his law dictionary, and his law reports.

Retrieved from ‘https://bookowners.online/index.php?title=Anthony_Allen_1685-1754&oldid=19738’
Categories:
This page was last modified on 4 May 2021.
Content is available under CC BY-NC 4.0 unless otherwise noted.