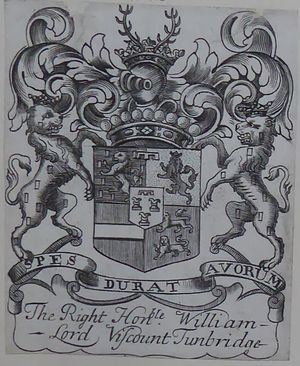 Son of William Henry Nassau de Zuylestein, 1st Earl of Rochford, a relation and close friend of William III who came to England with him in 1688, and became Earl of Rochford in 1695. The younger William began a military career in 1702, serving in the English army in several campaigns in Europe during the following years; by 1706 he was a lieutenant colonel, by 1710 a brigadier general. He was elected MP for Steyning in 1708. He inherited his father's title and estates in 1708 but was killed two years later at the battle of Almenara in Spain.

Nassau de Zuylestein used an engraved armorial bookplate (Franks *112), made between 1695 and 1708 when he was styled Viscount Tunbridge; the extent and disposition of his library is not known.

Retrieved from ‘https://bookowners.online/index.php?title=William_Nassau_de_Zuylestein_1682-1710&oldid=23112’
Categories:
This page was last modified on 9 August 2022.
Content is available under CC BY-NC 4.0 unless otherwise noted.