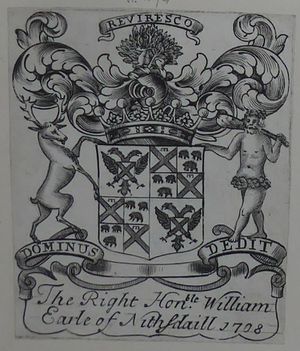 Eldest son of Robert Maxwell, 4th earl of Nithsdale (1627/8–1683), he was probably born at Terregles Castle, near Dumfries. Brought up as a Roman Catholic and supporter of the exiled James II, he went to James's court in Saint Germain on reaching his majority. He married in Paris and return to Scotland. In 1703 his Protestant neighbours attacked and ransacked Terregles Castle and Maxwell was summoned to Edinburgh on suspicion of harbouring Cathloc priests. He was acquitted but deprived of his hereditary office of steward of Kirkcudbright.

In 1715 he raised a local force of Jacobite troops and joined the invasion of England. He was captured at Preston and taken to London and imprisoned in the Tower. He was tried for treason and sentenced to death but escaped from the Tower on the day before his execution in disguise as his wife's maid. He escaped to France and subsequently went to the Jacobite court in Rome where he led a life in rather reduced circumstances, dying there in 1744.

Retrieved from ‘https://bookowners.online/index.php?title=William_Maxwell_1676-1744&oldid=22600’
Categories:
This page was last modified on 21 June 2022.
Content is available under CC BY-NC 4.0 unless otherwise noted.