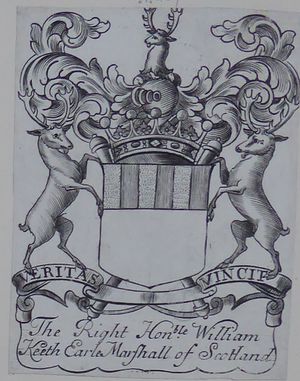 The son of George Keith, 8th Earl Marischal (d. 1694). He at first accepted the new regime of William and Mary, taking a seat in the Scottish Parliament in 1698 and became a member of the privy council in 1701. However the family were committed Jacobites and Keith was imprisoned in Edinburgh Castle during the 1708 rising. He nevertheless was subsequently made one of the Scottish representative peers in the British House of Lords.

Retrieved from ‘https://bookowners.online/index.php?title=William_Keith_ca.1664-1712&oldid=21380’
Categories:
This page was last modified on 22 December 2021.
Content is available under CC BY-NC 4.0 unless otherwise noted.