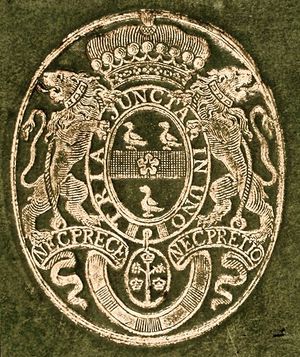 Son of Sir James Bateman of Shobdon Court, Herefordshire, a wealthy London merchant and Lord Mayor 1717-18, from whom he inherited extensive estates in 1718. Matriculated at Peterhouse, Cambridge 1712, but did not graduate; admitted at the Inner Temple 1712. He was MP for Leominster 1721-34, created Viscount Bateman (in the Irish peerage) in 1725, and elected a Fellow of the Royal Society in 1733. He died in Paris. 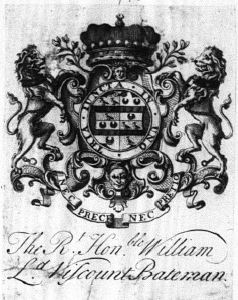 Bateman used an engraved armorial bookplate (Franks 1743). The extent of his library is not known; after the death of his son John, 2nd Viscount in 1802 the family property passed to a relative, William Hanbury, later 1st Baron Bateman, whose son's library was partly dispersed by Sotheby's in 1896.

As well as the bookplate, Bateman used an armorial binding stamp. Several of the books recorded in the Armorials database also have an inscription "Bateman" within.

Retrieved from ‘https://bookowners.online/index.php?title=William_Bateman_1695%3F-1744&oldid=19720’
Categories:
This page was last modified on 3 May 2021.
Content is available under CC BY-NC 4.0 unless otherwise noted.