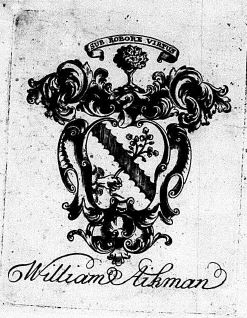 Son of William Aikman, Laird of Cairnie. He studied at Edinburgh University before training there and in London as a painter. He then spent several years travelling and painting in Italy and Turkey before returning to Edinburgh in 1711 and establishing a successful practice as a portraitist. He was persuaded to move to London in 1722 where his success continued, and he was commissioned by many leading aristocrats and statesmen. He died in London but was buried in Edinburgh.

Aikman used an engraved armorial bookplate (Franks 229); the extent and disposition of his library is not known (his only son died shortly before him).

Retrieved from ‘https://bookowners.online/index.php?title=William_Aikman_1682-1731&oldid=19501’
Categories:
This page was last modified on 26 April 2021.
Content is available under CC BY-NC 4.0 unless otherwise noted.