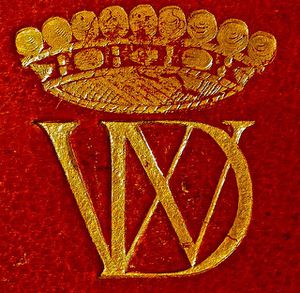 Son of Sir Edward Devereux of Castle Bromwich, Warwickshire. He succeeded his father as 2nd baronet in 1622, and his cousin Robert Devereux as Viscount Hereford in 1646. He held a series of county administrative offices from the 1610s onwards, and was MP for several boroughs between 1614 and 1625. His biography, in the History of Parliament, is much dominated by a series of family disputes.

Books survive with Devereux's coronetted monogram stamp; the extent and disposition of his library are not known, and he died intestate. These books must all have been bound between 1646 and 1657, when he was a Viscount. One of the books recorded in the Armorials Database has the inscription of George Carew, and is likely to have had one of Carew's armorial bindings originally; Devereux evidently ordered its replacement. Examples: Cambridge UL Rel.c.66.4; Houghton Library, Harvard Typ 515.64.603.

The recorded books are all handsomely bound in red goatskin. The book in Cambridge UL has no annotations; it subsequently belonged to John Moore (d.1714), suggesting dispersal of Devereux's books not long after his death.

Retrieved from ‘https://bookowners.online/index.php?title=Walter_Devereux_1575-1657&oldid=22170’
Categories:
This page was last modified on 28 March 2022.
Content is available under CC BY-NC 4.0 unless otherwise noted.