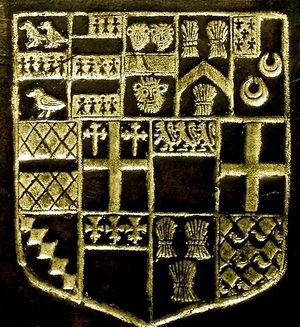 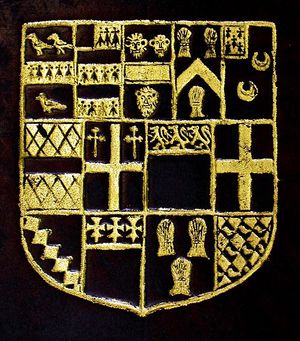 Born probably at Slaugham, Sussex, son of Richard Covert, landowner and member of a family which had been accumulating property in Sussex over several centuries. Entered Gray’s Inn 1567. Inherited the family estates in 1579. MP for Sussex 1572, and returned to numerous parliaments thereafter, down to and including 1626. During his lifetime he accumulated more property in Sussex, Surrey and Kent.

Over 20 books survive in various libraries with Covert’s armorial stamps, indicating that he originally had a significant collection. Traceable books are mostly in English or Latin, with late 16th or early 17th century imprints, suggesting accumulation mostly by purchase during his lifetime. His elaborate and much-quartered armorial is usually found on bindings with simple but elegant additional decoration and his library seems to have been a handsome one befitting the head of a wealthy family. An Ortelius atlas from his library, now CUL L*.7.6, has contemporary hand-colouring throughout to a high standard and would have been an expensive book.

In his will, Covert directed that “all my books in my study at Slaugham shall remain as standards in my house to be and inure to the sole use and benefit of my next heirs”; he clearly recognised his library as a distinct and valuable part of his estate. He appears to have had no surviving children at the time of his death and his estate was mostly left in trust to pass eventually to children of Sir Walter Covert of Maidstone, or other relatives, depending on the relevant heirs reaching adulthood. Inscriptions in Covert’s books suggest that the collection began to be dispersed by the second half of the 17th century.

Covert’s books are identified from his armorial stamp, normally in gilt; he does not appear to have typically inscribed or annotated his books. Two very similar stamps, of the same dimensions, are found variously used.

Retrieved from ‘https://bookowners.online/index.php?title=Walter_Covert_ca.1549-1632&oldid=20465’
Categories:
This page was last modified on 10 July 2021.
Content is available under CC BY-NC 4.0 unless otherwise noted.