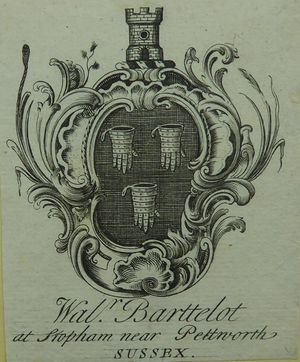 Son of Walter Barttelot, canon of Chichester Cathedral, and a member of a gentry family which had long held an estate at Stopham, Sussex, which this Walter inherited in 1743. He matriculated at Oxford but did not graduate, and was admitted at the Middle Temple without being called to the Bar. In 1754 he was High Sheriff of Sussex.

Barttelot used an engraved armorial bookplate (Franks 1705). The extent of his library is not known; it would have been inherited, with the bulk of his estate including his "plate books goods and household furniture" by his eldest son, also Walter. The family continued down many generations and became baronets in 1875.

Retrieved from ‘https://bookowners.online/index.php?title=Walter_Barttelot_1723-1764&oldid=23973’
Categories:
This page was last modified on 5 December 2022.
Content is available under CC BY-NC 4.0 unless otherwise noted.